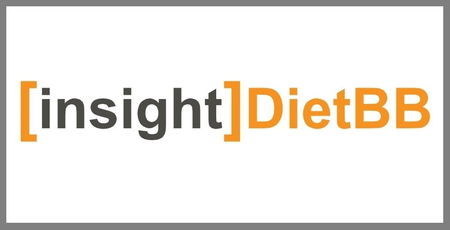 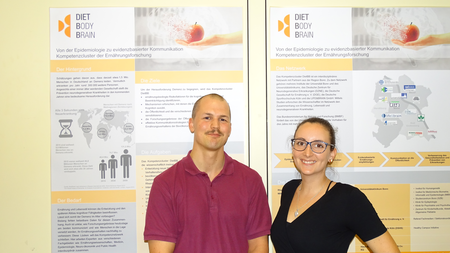 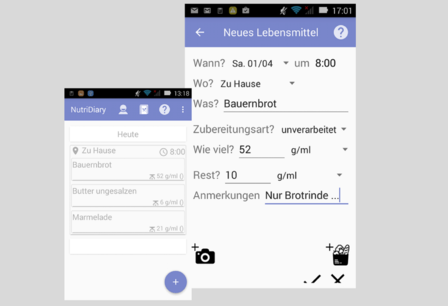 Interview with Stefanie Koch and Mats Wiese from Thematic Area 1

The thematic area 1 works on new methods and technologies for nutritional research. Stefanie Koch and Mats Wiese are developing and evaluating the NutriDiary app - an app that serves as a digital 3-day weighed dietary record. It is currently being tested in the DONALD study and will ideally replace the paper version of the previously used 3-day weighed dietary record as a nutritional assessment instrument in the future. DietBB interviewed the two scientists in Bonn.

DietBB: Ms. Koch, Mr. Wiese, thank you very much for taking the time for this interview. You are working on an app for dietary assessment: What features does the app provide and how does it work?
Wiese: We have been given the task to convert the 3-day weighed dietary record of the DONALD study into a digital version - preferably a one-to-one conversion. So far, the dietary record is carried out with paper and pen. With the newly developed app, all information can now be entered digitally. Through a drop-down menu, it is possible to select foods from a list and one can also enter new foods manually. The weighed quantity can be recorded or for out-of-home consumption standard household measures are available for selection.
Koch: In addition, a photo function is provided, which makes the previous process much easier. So far, study participants have collected all packaging of consumed foods, such as yoghurt cups, to hand them over with the dietary record, or have sent pictures digitally to the study staff.
The study staff uses this information to calculate the nutritional value of a food. With the app, the participants simply take a picture of the nutrition information label and the list of ingredients. Thus, collecting of food packaging is no longer necessary and the pictures are directly integrated into the dietary record.

DietBB: What happens when the record is finished after 3 days?
Wiese: When participants finalize the recording of their dietary intake over the three days, a "send record" button will appear on the fourth day. If the user pushes the button, a request to check the entries for completeness will be displayed. The dietary record is automatically sent to a server, where data is available for download. Since the dietary record already exist in a digital form, the previous manual data input by the study staff is no longer required.

DietBB: Which database is used?
Wiese: The DONALD study has its own database, which also includes, for example, convenience products. For all products, not only the "Big Seven" food information is available but also the content of other nutrients estimated by conducting a recipe simulation. Currently, there are 12,781 food items available for the app. Out of these, 10,275 are branded food products, 1,734 are generic products based on the German Nutrient Data Base (German: Bundeslebensmittelschlüssel) such as flour type 405 and 772 which are food supplements and pharmaceuticals that should be recorded as well.
Koch: One of the challenges of database use for web- or smartphone-based nutritional assessment instruments is the description of food items. In databases such as the German Nutrient Data Base food items are described in a partly complicated way and the names of branded food products are not included at all, depending on the database. Therefore, applying accurate food descriptions to those databases is a major task.

DietBB: How long did it take to develop the app?
Wiese: From the first draft to the current version, it took almost 3 years. However, I must emphasize that the development of an app is a continuous process. In the course of the testing, we always identify new approaches to improve the app. That is why we must continuously develop the app.
Koch: Within the DietBB project, we are cooperating with Ionut Andone, a PhD student from computer science. Mr. Andone has programmed the software and is currently working on the programming of the iOS version.

DietBB: Since when has the app been tested?
Koch: Since May 2017, each participant of the DONALD study has been offered the app as an alternative to the pen-and-paper version of the 3-day weighed dietary record as part of the annual check. Currently, the only requirement is an Android operating system on the smartphone. Many participants are interested in trying the app.
Wiese: To date, 68 app accounts have been assigned, and 19 dietary records have been completed using the app. Apparently, the interest in the app is greater than the actual use. We assume there are different reasons for this.

DietBB: What reasons do you think participants have for not completing the dietary record?
Wiese: We see that the participants download the app and give it a try, but finally opt for the pen-and-paper method. We suspect that switching to the digital method is for some participants more difficult than expected. Koch: The participants hope for a relief, which we believe is given by the app. However, there is a slightly increased initial effort because the participants have to learn how to use the app first.
Wiese: In addition, there is little time during the annual check in the study center to give the participants a comprehensive introduction into the app or to try out the app on site. In order to counteract this problem, a help mode is integrated in the app, which leads through the use in detail. However, this in turn requires the readiness to use the text of the help mode and to deal with it. Therefore, we wrote a printed quick start guide explaining the most important features of the app. From now on, this guide is handed out to the participants during the annual check.

DietBB: How is the app evaluated and validated?
Wiese: For the evaluation, participants are asked at the end of the dietary record to complete a questionnaire to calculate the System Usability Scale Score. This score is an established tool that provides information about the usability of the app and can be compared with the scores of other apps or devices. In addition, we rely on the participants to report technical problems or other feedback within the free text function. We expect that sufficient data for evaluation will be available at the end of 2017.
Koch: In the DONALD study 24-hour urine samples of the participants are collected. The validation of the app is performed using urine biomarkers. A comparison with the paper-based dietary record will be carried out - not by a direct comparison of the instruments, but by a comparison on biomarker level. At the moment we are waiting for enough urine samples to start the validation process.
DietBB: Is it the long-term goal to replace the paper version of the dietary record?
Koch: This would be optimal, as the use of the app would simplify the recording of habitual diet for both, participants and study staff.
Wiese: However, this change should not be implemented following a top-down approach, i.e. the researchers impose employment of the app on the study participants, but ideally, from the bottom-up, i.e participants use the app by choice.

DietBB: What are the clearest benefits of the app compared to the paper version?
Koch: The participants do not have the effort of bringing everything on paper, they can choose foods from a list, they are able to take photos of the packaging instead of collecting and delivering it.
Wiese: The app is also beneficial for us scientists. A great advantage, for example, is that nutrient information is automatically assigned for all food items selected from the list. This eliminates the need for manual assignment by the study staff. This work requires a lot of time and the effort for this task can be significantly reduced by the app.

DietBB: Do you already have plans for further development?
Wiese: Yes, we do. Currently, as mentioned, we are working on the iOS version. In addition, the possibility of a barcode scanner is checked. This feature would enable participants to read the barcodes of packaged food items so that the process of recording would be considerably simplified.

DietBB: Ms. Koch, Mr. Wiese - thank you very much for the interview and we wish you both continued success!